People who participate in endurance sports inspire me. Their perseverance, drive, determination, and athleticism, is impressive. Even more so when they are passionate about a cause and give back. Sometimes the giving part hits closer to home. It is more than a passion. It is a quest for a cure.

After reading a story on CBS8.com by News Anchor and friend, Carlo Cecchetto, I felt compelled to share an inspirational story that reinforces that

The 2013 Rock-n-Roll San Diego Marathon is Sunday, June 2nd. There will be thousands upon thousands of runners participating. Many of them are running with a specific best time in mind. Others are running their first marathon. Some are participating simply for the love of running. For others, it is more than the thrill of crossing the finish line, it is a way to garner awareness and raise funds for causes that have made a lasting impact on their lives. 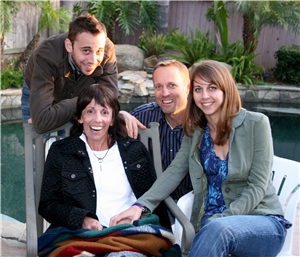 disorder that results in the progressive loss of both mental faculties and physical control. Symptoms usually appear between the ages of 30 to 50 and worsen over a 10 to 25 year period. Everyone has the HD gene, but it is those individuals that inherit the expansion of the gene who will develop HD and perhaps pass it onto each of their children.”

It is a horrible and debilitating disease. Right now there is no treatment, and there is no cure. There are medications that can relieve some symptoms. However, research has yet to find a means of slowing the deadly progression of HD. Per the Huntington’s Disease Society, current estimates are that 1 in every 10,000 Americans has HD and more than 250,000 others are at-risk of having inherited it from a parent. Once thought a rare disease, HD is considered one of the more common hereditary diseases.

Bill Johnston’s wife, Ramona, suffers from HD. This is the first year she will be joining them in the race. Haley, her daughter, is thrilled at the opportunity to experience this with her mother.

For more information about the Johnston family’s fight for a cure and HD awareness click here CBS8.com for the full story.

Gina created the blog, Lipstick, Shoes, Men and Other Pointy Things in 2014. She is the Co-Founder and Co-Host of the podcast, Two Fab Femmes. She has a Bachelor’s of Arts Degree in Sociology from UCLA and garners over 18 years of experience in marketing, advertising, project management, multimedia, music, film production and more. She is an optimist by nature, sometimes skeptical, and an opinionated Blogger/Podcaster with a penchant to empower others. She is a nose to the grindstone, even-tempered, Italian gal who is sensitive, logical and always curious. Growing up as a dancer, the arts have always been at the forefront of her life. She picked up an interest in storytelling, writing short stories which lead to co-writing screenplays and songs with her brother Joseph. She worked as a crew member on a number of feature films, is an award-winning short film director, and co-hosted WSRadio’s online movie review show “Movie Mavens.” When she is not writing, podcasting, hanging out with family & friends, or sleeping, she works as Project Manager/Business Analyst for a San Diego-based Resort company working alongside the Strategic Solutions team. A native of California, she enjoys sunsets, long walks on the bea…and sarcasm. Gina has had the pleasure of working for some high-profile companies such as Yahoo!, DreamWorks SKG, Disney, Sony Computer Entertainment Inc., AKQA, and the San Diego Union-Tribune. View all posts by Gina Cafasso